If you are looking for a Super Easy Raspberry Danish recipe, you have found it. Made with refrigerated store-bought biscuits, raspberry preserves, butter, cinnamon sugar, and a quick yummy vanilla glaze.

The other day I was making refrigerator biscuits to go with the  INSTANT POT MISSISSIPPI POT ROAST that I was making. It was still early in the day and I dying for something sweet.

I love using biscuits or crescents when making recipes, it is such a great shortcut. I used crescents when I made the Super Easy Cheese Danish that I shared on the blog a while back. Biscuits were used to make  Caramel Pecan Rolls that were a huge hit.

I wasn't going to need all my biscuits to serve with dinner, so decided to make some donuts or danish. I played around with the biscuit dough and ended up with these delicious raspberry danishes. They were so easy to make that it's hard to even call it a recipe.

These danishes are great to make ahead of time and grab for a quick take with you for breakfast when you are running out the door. They are also great for an afternoon snack with a cup of coffee, or late at night if you are like me and crave sweets at night. So let me share with you how to make these babies. I promise you will love them. (or at least think you will).

Out of the Oven 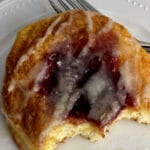